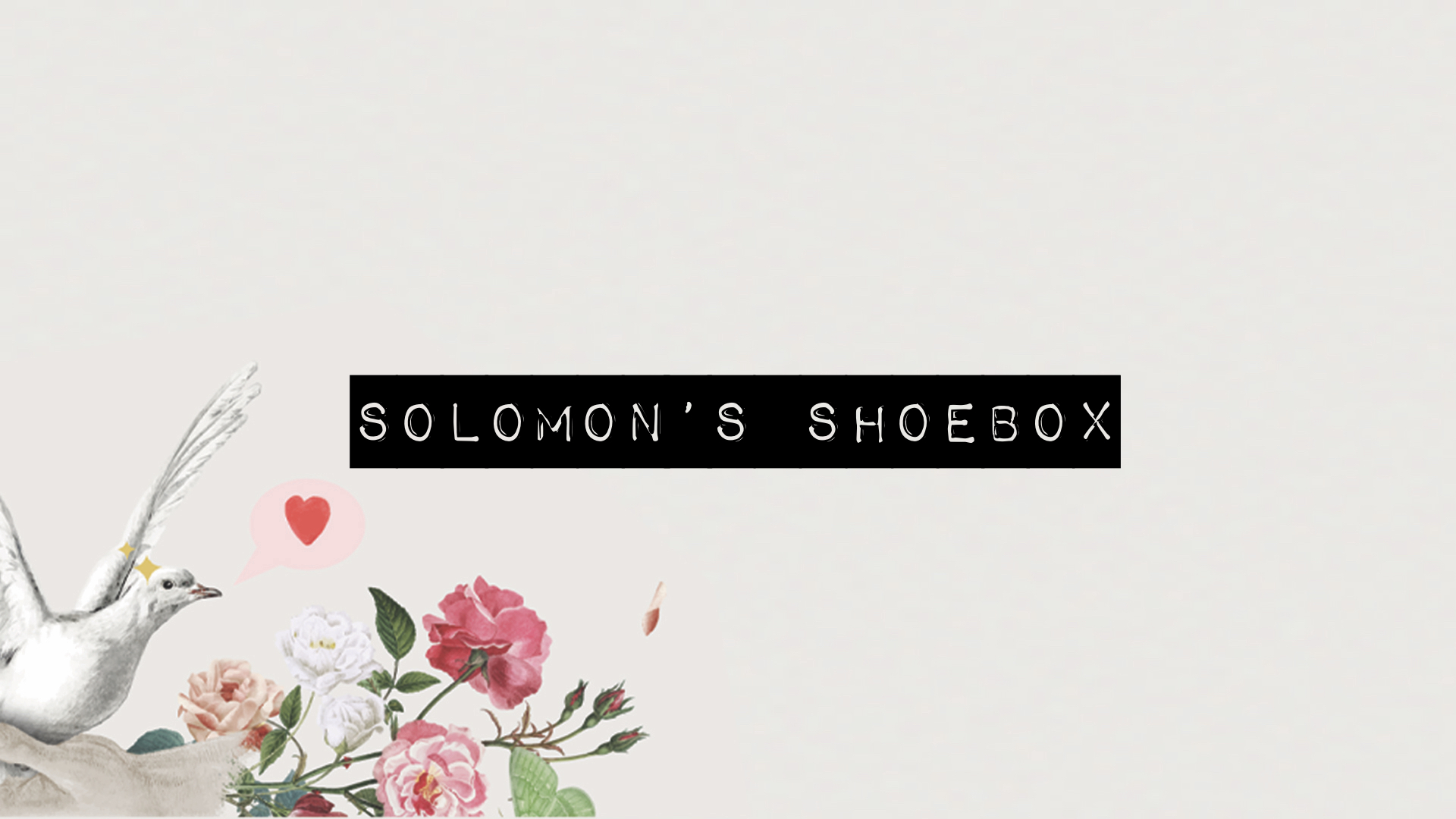 As we dive into the first chapter of a Jewish love poem, we are going to see three traits of God-honoring romantic relationships. Simply put, these are the three qualities of a high-quality partner. Solomon and his bride will show you how your partner should have character that you respect, they should respect you, and they should respect God.

Here is how I set up my story:

”Why does our guest room smell like blue cheese?" I asked my wife while stepping into a semi-abandoned room on the backside of our apartment. Sniffing the air, I followed the scent like a vest-wearing dog at the airport. Our senses led us to a closet in the corner. As we opened the door, our faces wrinkled, and our muscles tensed at what we saw — a massive leak.

What was in that closet? Well, I didn't really know, but it was certainly wet. It turns out there was a bunch of storage boxes, a fur coat we found at an estate sale, and a shoebox that my wife immediately tried to rescue. In a panic, she ripped open the shoebox to reveal hundreds of letters, cards, menus, playbills, and little trinkets. She was relieved to see that nothing was majorly damaged. "What are all these things?" I asked. "These are all the memories I collected while we were dating," she blushed. While the leak was stressful, unearthing this collection was delightful.

PROP: Bring out a shoebox full of love letters and trinkets.

With a smile plastered on my face, I flipped through the love notes we exchanged during our long-distance relationship. I smirked at cheesy anniversary cards celebrating seven months of dating. I laughed while looking at the reservation slip from the restaurant we visited on our first Valentine's date. "This was the first time I tried to kiss you," I remarked.

Love letters are great, aren't they?

Whether it's a note passed in class, a bold text followed by a typing bubble, or a cheesy anniversary card sent in the mail, writing back and forth during young love is a right of passage. It's that way now, and it's been that way since the invention of language. In this study, we get to peek into an ancient conversation between two starstruck lovers who recently tied the knot in marriage.

Yes, we will get to open up a box of love letters written a few thousand years ago. These lovey-dovey messages appear in an Old Testament book called "Song of Solomon."

It chronicles the romantic exchange between Solomon and his new bride. Think of it like King Solomon's shoebox full of love letters.

Here is a warning. Some of these verses may make you blush. After all, you are reading the words of a young married couple in their honeymoon phase.

They say exactly what they are feeling, and sometimes it's a bit PG-13.

This book was traditionally censored out of Jewish texts until after a young man's bat mitzvah.

When he became a man, then he was allowed to see this steamy section of Scripture.

While some of these words may make you squirm, I believe God wanted Song of Solomon in the Bible to remind us that romance is good, that it’s God's design, and that He desires His people to experience the life-changing blessing of a healthy relationship.

Together, we are going to explore modern lessons from ancient love letters. As we dive into the first chapter of a Jewish love poem, we are going to see three traits of God-honoring romantic relationships. Simply put, these are the three qualities of a high-quality partner.

When the bride speaks of Solomon, her first verses aren't about his handsome looks, humor, or fashion sense. She comments on how his "name is like the spreading of a fragrance."

Her first source of attraction is his character and reputation.

Using a metaphor, she compares his personality to perfume.

What does that mean? When you're wearing perfume, people notice. The same is true for your reputation. People notice it.

Everyone acknowledged the wisdom, demeanor, and high standards of Solomon.

She finds that attractive.

Godly character is the most important trait of a good mate.

Have you ever heard someone say that they "always seem to attract the wrong girls or guys?"

This likely has more to do with reputation than bad luck.

My grandmother used to say, "if you keep catching the wrong fish, use different bait." While the metaphor is dated (she was born in the 20s), it can be decent advice for your dating life.

If you aren't attracting the right people, then you need to honestly evaluate your reputation and character.

If it's not in the right place, then you need to wait.

While waiting on the right person, focus on becoming all that God wants you to be. Grow closer to God.

Fill your daily routine with God's Word. Worship with every facet of your life. Obsess over obeying God's great commandment to "love God and love people."

As you do this, not only will you grow, but you will begin to attract the perfect person for you.

Refuse to get it backwards.

As you pursue God, the right person will come along.

— TRANSITION — While it’s important that they are known for good character, it’s also important to evaluate how they view you. While you are not a mind-reader, Solomon and his bride have some insight on what to look for. Yes, they should be respected, but they should also show respect.

There is a lot of ancient context to unpack here.

In the first love letter, Solomon's spouse opens up about one of her biggest insecurities. She says, "I am dark...as the curtains of Solomon's tents."

What's she talking about? Using hyperbole, she suggests that her skin looks like some black-out curtains used to block the sun.

To sum it up, she is self-conscious about her complexion.

At first, this seems offensive, but let's unpack their context.

Today people put a lot of work into tanning their skin.

There are multi-million dollar industries entirely built around helping people look as bronze as a statue.

That was not the case back then.

If your skin was too tan, it meant that you worked in the fields under the hot sun all day. That indicated that you were poor. It had nothing to do with complexion and everything to do with the fact that she felt inferior to be with Solomon, an ultra-successful member of the royal family.

She felt as though he was out of her league, and she opened up to him about that insecurity.

Look at how her groom replies. Solomon says that she is like "a mare among Pharaoh's stallions."

Wait, did this guy just call her a horse? That seems kind of strange.

Call her a unicorn, maybe, but a horse? It's actually an adorable response to her vulnerability.

The Egyptian Pharaoh was known to only use horses that were white as snow.

These horses weren't just majestic; they were basically worshipped.

People believed Pharaoh's steads were practically supernatural, and the Egyptians esteemed them as a deity.

He respected her so much that he refused to let her believe a lie about herself.

Look for this kind of respect in your relationships.

If you feel worse about yourself whenever you finish spending time with someone, then you may need to reevaluate their respect for you.

A God-honoring partner respects you, encourages you, inspires you, and helps you see yourself the way God sees you. Fall in love with someone who helps you love yourself more.

Let’s take a look at Song of Solomon 1:7. Tell me, you whom I love, where you graze your flock and where you rest your sheep at midday. Why should I be like a veiled woman beside the flocks of your friends?

Smack dab in the middle of chapter one, there is a strange analogy.

The bride comments that she does not want to appear like "a veiled woman."

This is not a reference to a wedding veil; it's actually quite the opposite.

She's alluding to a person who lived and loved loosely.

Someone who gave their love away easily and often.

You can fill in the blanks.

If you want to see whether someone respects God, then look at how they respect God's standards for love.

Romance was God’s idea and his design. He loves it when people fall in love. However, God designed romance to be safe and closely protected.

We should strive to love with God’s standards in mind.

It’s not because He wants to control you. God just wants to protect you.

When you reserve physical intimacy for the safety of marriage, then you are saving yourself from pain, heartbreak, and disappointment.

It's certainly counter-cultural, but strive to build your relationships on honoring God.

How do we do that?

By putting his commandments into practice. It’s easy to take shortcuts to chemistry, but don’t just create chemistry by connecting physically.

When you do this, you are building your future success on a strong foundation.

If you are reading this and feel pain or shame, please hear this.

If there is guilt in your past, there is forgiveness for your future.

You are not defined by your mistakes; you are defined by Jesus and who He says you are.

Simply commit to building character, respecting others, and respecting God from this day forward — all the way into the fulfilling future that God has for you.

Q1: Think of a couple that has a great marriage. What are they like? How do they seem to treat each other?

Q2: Why is character so important in a relationship? What character traits make someone a respectable and encouraging partner?

Q3: How should a healthy relationship make you feel about yourself?

Q4: What does it look like for a healthy relationship honor and respect God?

Q5: Why do you think it’s important to God that we save ourselves for marriage?

Application: What is the significance of understanding God’s grace as you navigate dating?