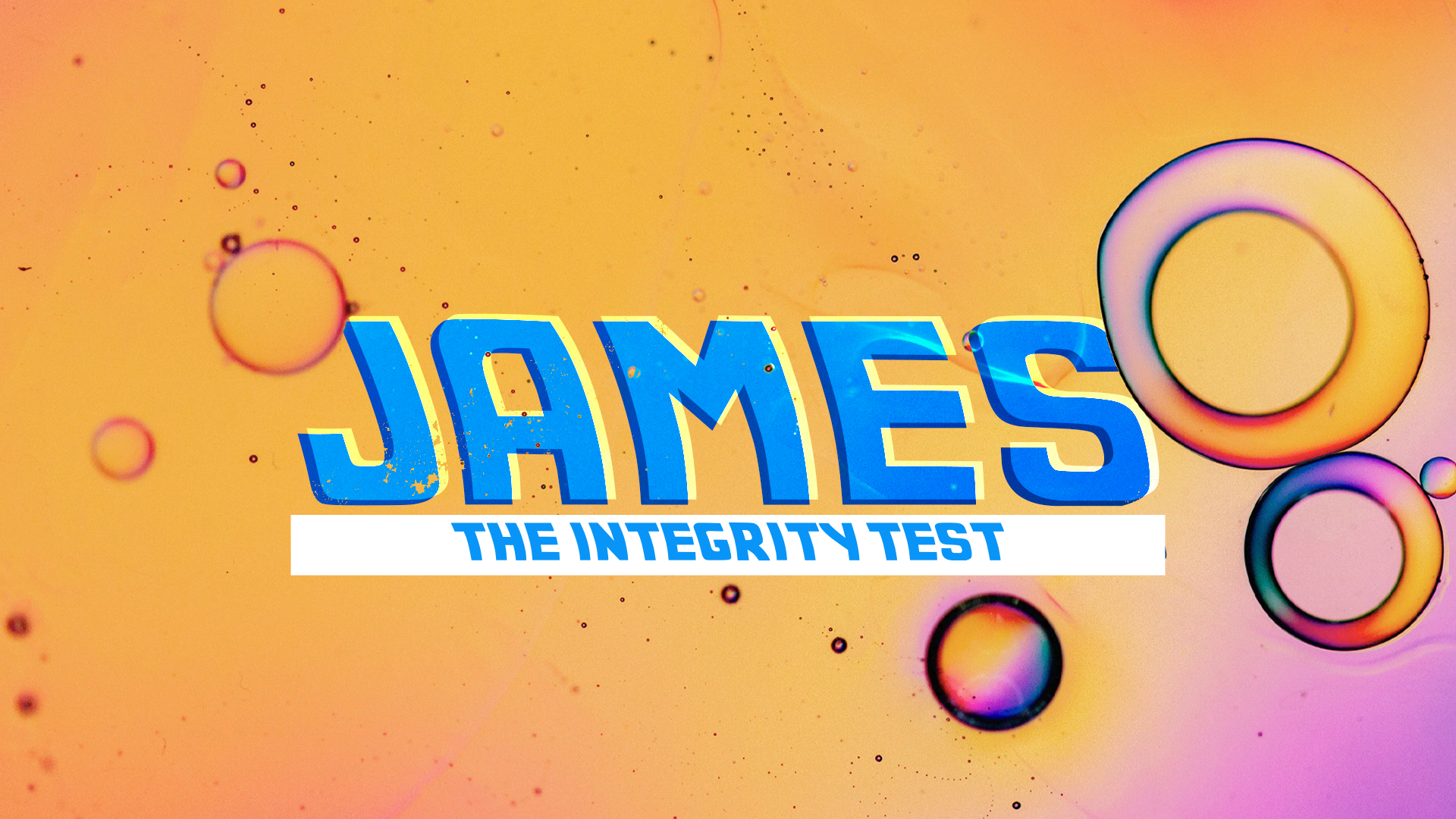 Before sinning, most people think “Is anyone going to know I did this?” James proposes that instead, we ask, “Is this the right thing to do?” If your primary concern is being caught, then you have already failed the integrity test. When you live with integrity, then your character remains constant. It is the same on Friday night as it is on Sunday morning. It is the same in your group chat as it is in small group. James calls us to live a life of character, not to play a character.

"Not even God can sink this ship," a proud sailor said to a journalist.

They were standing in front of a huge steamship before its maiden voyage from the United Kingdom to the United States in 1912.

The USS Titanic was a modern marvel. It could hold nearly three-thousand passengers and give them an unimaginably luxurious vacation in the middle of the ocean. The world watched in wonder as the enormous cruise ship set sail, then watched in terror as it sank.

The Titanic struck an iceberg off the coast of Newfoundland.

The impact caused the ship to rapidly fill with water until it snapped in half before sinking to the ocean floor. The sinking of the USS Titanic remains the most tragic cruise ship disaster in human history. Over fifteen hundred people died during their luxury vacation. The real horror lies in the fact that it could have been prevented. People used to claim that the iceberg left a massive hole in the side of the ship. Shipwreck explorers and scientists discovered that the damage was surprisingly small. The collision caused six small fractures to form on the side of the vessel.

These slits appeared on the seems where builders cut corners during the manufacturing process. It's external appearance was flawless, but it's internal design was flawed.

The problems were already present.

They were just exacerbated by the iceberg's impact.

They were invisible, but they were powerful.

When the titanic sank, its reputation went down with it.

Small, nearly invisible, problems can bring down even the biggest reputations.

I have seen small cracks become big problems in people’s lives. They always starts unnoticed, or even invisible. Why? Because they almost always start in the mind.

A secret website visit can become a full-on addiction.

A private conversation can lead to a broken relationship.

Every mistake you’ve ever made started in your mind. That is why James encourages us to stop doing stuff by winning the war within our mind.

We are in the middle of a four-part series about living a life of integrity. As the Apostle James pens his letter to the church in Jerusalem, every line is designed to help them live out their faith — both publicly and privately.

In private is where our integrity is developed and tested. This is especially true in the privacy of our minds.

You’ve probably never done anything bad without thinking about it first.

Your actions start with a thought.

Thus, we don’t change our behaviors only with behavior modification.

If you want to change what you do, you need to change how you think.

This is why James gives us an integrity test to run through our minds before we act. In chapter four, he says the following:

This short passage takes place at the beginning of a long discourse about the rich and the poor. James, like Solomon, leveraged the use of opposites in his proverbs.

He likely noticed a disturbing trend where people in his community were taking advantage of the poor and he wanted to put a stop to it.

In the ancient Roman Empire, people made money in one of two ways — they were either landowners or merchants.

The first category were landowners. They were from a wealthy family that gave them the benefit of land ownership, access to credit, and a high social status. These people often acquired their wealth by taking advantage of poor people through indentured servitude or slavery.

On the flip side, there were the merchants. These people collected their wealth without any social status attached to it. They simply hustled their hardest to create a product, grow a crop, or provide a service.

This world was similar to the turn of the 19th century in the united states. Wealth was becoming widely accessible, which meant that people were allowing greed to control their lives.

When we examine the message of James, he seems to be on the side of the poor — like most of scripture. This is not because wealth was bad, but because people in this era often worshipped wealth while doing whatever it took to gain more.

This often meant they would take advantage of people in order to make some extra money. Representing the voice of God, James reprimanded this behavior in chapters four and five.

I know that you aren’t a wealthy merchant or landowner in the Roman Empire. That doesn’t mean you get to mentally check out for this message.

This passage isn’t reserved for money. James chapter four packs a powerful punch for all of us, because it shows the origin of our sin.

Their wealth wasn’t bad, it was their obsession with it that caused trouble. The same is true for us.

Bad behavior doesn’t just happen in an instant. It starts as thoughts.

As the Apostle James concludes his collection of proverbs, he ties a bow on the previous four sections by proposing a filter for everything we do. Yes, every single thing. James shifts his focus from our specific behaviors to our overall lifestyles.

Throughout the letter, James discusses words, wealth, arguments, and arrogance. His church was probably asking questions like "is it sinful to do this, even if it doesn't hurt anyone?" What's his answer?

This short passage gives us an integrity test.

Before sinning, most people think "Is anyone going to know I did this?"

James proposes that instead, we ask, "Is this the right thing to do?"

If your primary concern is being caught, then you have already failed the integrity test.

When you live with integrity, then your character remains constant.

It is the same at church as it is in your room.

James calls us to live a life of character, not to play a character.

Watch out for small secret sins.

Like with the Titanic, little hidden fractures can sink you.

Solomon taught, "Whoever walks in integrity walks securely, but whoever takes crooked paths will be found out” (Proverbs 10:9).

This passage promises that secrets will eventually catch up to you. They may cost you a career, relationship, scholarship, or friendship.

God's not saying this to control you; it's quite the opposite.

God wants to keep you safe.

This proverb is an expression of God’s affection and protection for us. He is a good father who wants good things for His children.

Our loving Father knows that secret sins are little fractures ready to sink you.

How do you apply the integrity test to your daily life? Whenever you’re making a decision, ask yourself: “Is this the right thing to do?”

It doesn't matter if no one will find out.

Do the right thing, even if it’s the hard thing.

Filter all of your decisions through the integrity test. Ensure your daily decisions affirm the following:

You, as a person, are made up of three distinct parts — body, mind, and spirit. Your decisions should be good for all three, as they are deeply connected.

Just as exercise benefits your physical body, it also releases stress from your mind.

Prayer and meditation benefit your spirit, while also releasing tension from your body and worry from your mind.

Just as rest is good for your mind, it’ll also benefit your body.

Make healthy decisions that develop every fiber of your being — body, soul, and spirit.

Your decisions don’t just affect you. They can dramatically affect those around you too.

Your actions should never intentionally hurt someone or cause them harm.

Whether it’s a harsh word or a harmful tone, focus on how you make others feel.

If something is not benefiting your connection with God, then you need to cut it out.

Small, daily decisions can make a massive difference in your overall relationship with Jesus.

As you end each day, ask yourself if you are closer or further away from God than you were the day before.

If you feel further away, then strive to identify why. I can assure you that God isn’t the one who moved.

Integrity is when your public life matches your private life. As we discover keys to integrity, let’s apply an overarching filter to everything we do.

This is the integrity test:

If you feel as though this is a struggle for you, then you are not alone.

We have all failed.

We have all fallen short.

We have all chosen the easy way over the right way.

We all face the temptation to conceal the bad parts of our character.

Fortunately, Romans teaches, "there is no condemnation for those who are in Christ" (Romans 8:1).

If you are a Christian, then God is not mad at you or condemning you.

He just wants something better for you.

If you've fallen short, let God pick you up and put you on the right path. Then, with every step, pray for God to show you the way.

Q1: What questions do you typically ask yourself when you are trying to decide whether or not to do something?

Q2: How do people tend to justify making small, bad decisions that seem to go unnoticed?

Q4: What if you know the right thing to do, but still don’t want to do it? How can you begin choosing integrity over doing the wrong thing?

Application: What’s one small, daily action in your life that may reveal you are not doing what is right? How can you change this action or decision to pass James’ integrity test?