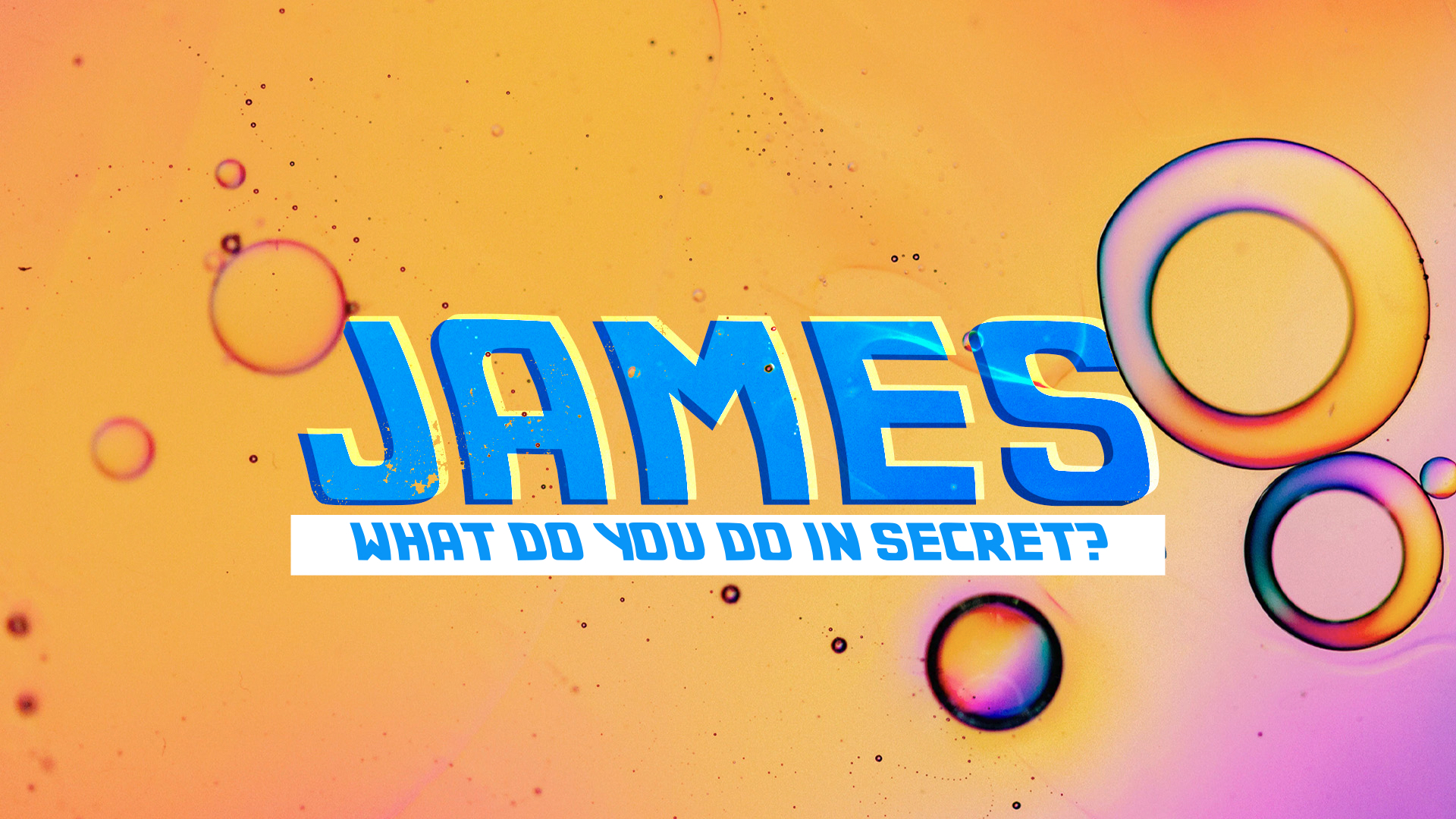 In chapter one, James says, “consider it pure joy” when you face trials. According to Jesus’ brother, we should be thrilled when we face temptation. Not because the temptation is fun, but because it will strengthen our faith. Every time you face temptation, you are given an opportunity to grow stronger. Your response to temptation reveals your true colors. The more you fight temptation, the greater your integrity grows.

I watched out the window as my mother's van disappeared into the distance. "Freedom," I gasped as I turned on the television and slid a DVD out of my backpack. My mom was gone for the whole day, so I decided to watch an R-rated movie that she forbid me from seeing. I was alone. I was unsupervised. I was foolish.

“I'm basically an adult," my thirteen-year-old brain gloated. While looking over my shoulder, the DVD loaded, and I hit play. Within seconds the movie played content not suitable for much of anyone, let alone a middle-schooler. There was blood, violence, and combinations of swear words that I couldn't even comprehend. I was hooked, glued to every frame of the film.

My entertainment was interrupted by the sound of someone unlocking the front door. I ran to the remote, but it was too late. My mother walked in during the worst possible scene. Busted. She snapped, "You're coming with me.”

Like a criminal in a cop car, I sat in the back of her van while she drove me to visit with her sister. "I am so sorry, mom!" I exclaimed. "I didn't know it was going to be so bad." She didn't buy my excuse since we had just talked about this movie a week before. "I am disappointed that you would disobey me the moment you were left alone," she explained. My worst fears were confirmed. She wasn't mad; she was hurt. I probably wasn't going to be allowed to stay home alone again until my twenty-third birthday.

Why was she so mad? I apologized, didn’t I? I may have even cried a little. Wasn't that enough?

I only apologized because I got caught. If I hadn’t been caught, I wouldn't have felt bad.

I would have just carried on as if nothing had happened. It's a slippery slope when you only feel remorse if your flaws are exposed.

It doesn't matter if you seem perfect in public if your private life is full of secrets. Honesty is important. Not just with your words, but with your lifestyle too.

Your well-being will rise and fall on your integrity. It'll be the source of your success and the spark of your setbacks.

We are kicking off a four-week series all about the topic of integrity called “Exploring Your True Colors.”

Have you ever heard that phrase? When someone shows their true colors, it means they’ve revealed themselves for who they truly are.

This is when someone shows you their real feelings, personality, or character.

This phrase originated in the 1700’s nautical culture.

Ships were required to fly certain flags at sea to show their country of origin, whether they could legally sail, and ensure other sailors that they were safe to pass.

Why was that requited? Well, pirates used to deceive other ships by sailing under false flags to avoid raising suspicions.

Passing ships, thinking that the pirates were friendly, moved closer to the pirate ship. However, once they were too close to retreat, the pirates would “show their true colors” by flying the famous, black Jolly Roger flag.

These evil ships pretended to be something they were not. While you aren’t an ancient wooden pirate ship, you can relate to this.

You have lied to earn someone’s interest. You use a different vocabulary around certain friends.

You have flown a fake flag around school or church to prevent people from knowing the real you — your true colors.

Over the next four weeks, we are going to explore the Book of James to discover the keys that unlock a life of integrity.

So, what is integrity? My sixth-grade teacher had a sign behind his desk that said, "Integrity is doing the right thing when no one is watching."

That hits the nail on the head. Your true self isn't your performance. Actually, it's much more personal.

Integrity is tested in private.

It's what you do when you're alone in your room, inside the privacy of your phone, or hidden within the thoughts of your own mind.

James wanted to help his friends thrive in life. So where did he start when writing his book of proverb-like sayings?

He didn’t start with life hacks or financial advice. Rather, he wanted to show them how to fight temptation.

If you win the battle within your mind, then you will be able to win the wars within your life.

James knew Jesus longer than any of the other Apostles. Why?

Because James was Jesus’ brother. James became the lead pastor at the world's first mega-church located in central Jerusalem.

This letter was directly written to “the twelve tribes.” (v1) This shows us that the primary audience was Jewish people who were scattered throughout the surrounding areas of Jerusalem.

They were likely believers who were scattered outside of the city after the tragic murder of Stephen — a central member of the church in Jerusalem.

As thousands of people listened to James preach, he used his platform to teach about faith in action.

Similar to Solomon, James shares short, practical proverbs to help Christians develop a faith that works. His short sayings give us the keys to living a life of integrity.

In chapter one, James says, "consider it pure joy" when you face trials.

According to Jesus' brother, we should be thrilled when we face temptation.

Not because the temptation is fun, but because it will strengthen our faith.

Every time you face temptation, you are given an opportunity to grow stronger.

Your response to temptation reveals your true colors. The more you fight temptation, the greater your integrity grows.

We all want to live a life where people know us and trust us. All of this starts with acknowledging that we can grow in the area of integrity. If you commit to owning this process, then your life will immediately begin to improve.

The sayings of James are not just spiritual — they are also helpful. James wrote this book 2,000 years ago in order to help people thrive.

What’s the first step towards living a thriving life? You must learn how to overcome temptation. That’s where James started in chapter one.

Your goal isn’t to avoid temptation. It’s to fight it.

Which brings us to tonight’s message. James 1:2-4 gives us practical advice for fighting temptation with integrity. Let’s look at the ABC’s of integrity:

Your integrity is the sum of your habits. Your entire life hinges on the habits you hold.

If you want to become healthier, then develop a habit of health.

If you want to be smarter, then develop a habit of learning.

If you want to grow closer to God, then develop a habit of spiritual discipline.

Your good habits help you, and your bad habits hurt you.

Temptation rears its ugly head through the habits and routines you already have. Do you regularly return to dangerous relationships?

Do you over-indulge to the point of addiction?

Do you have angry outbursts that hurt the ones you love?

You must become aware of the habits infecting your integrity.

Here is where we all need to start: Your first step is awareness. Acknowledge your habits.

Write down 3-5 good habits that are helping you develop integrity.

Write down 3-5 bad habits that are getting in the way of your integrity.

Breaking a habit is hard because it takes many steps.

An invisible chain reaction leads you towards your sinful mistakes and shortcomings.

Your environment, coping mechanisms, and behavioral patterns all trigger your bad behaviors.

A trigger tells your brain, "okay, now is the time to do that thing."

Do you know what "that thing" is for you? What triggers you to go there?

Every one of your habits is attached to a trigger.

Don't just focus on the habit or action you want to stop; focus on breaking the chain reaction that takes you there.

You may need to remove certain friends from your life.

You may need to delete a number from your contacts.

You may need to put parental controls on your phone.

You may need to remove the stuff you’re hiding under your bed.

You will never achieve a life without emotional triggers, but you can break the chain.

You need to let that trigger send you down a different path.

When you are feeling sad, turn on some worship music.

You cannot always change your emotional and environmental circumstances, but you can change how you react to them.

Your commitment to breaking the chain will “produce perseverance," like James promises.

What triggers you to act on your bad habits? Write it down.

Examples may include: When I feel bad about myself, I stop eating. When I feel lonely, I text my ex. When I am at a party, I give into peer pressure.

You cannot do this on your own.

You will inevitably fail, fall, and flounder.

You need supernatural help when it comes to overcoming destructive habits.

Invite God to join you in your struggle.

The Holy Spirit will empower you to overcome. If you do fall short, God's grace will pick you up again and again.

Make an action plan before you face temptation.

First, call out to God. These fights are too big for you to tackle on your own.

Second, call out to your friends. It's tragic that so many people choose to struggle without support. Tell someone you trust about your destructive habits today.

Ask them to pray for you, encourage you, and check on you. When the temptation is too much to bear, share the burden with your friends.

As we develop a life of integrity together, we must learn how to overcome temptation. It all starts with your plan of attack. We urge each of you to leave tonight with an action plan for fighting temptation when it comes. How can you reach out to God when you need help fighting temptation?

Who is a friend you can trust to ask for help? A life of integrity is a life of fulfillment. As you follow this process, you will form good habits and break bad habits.

It'll be hard, but it will be worth it.

With God, you got this.

Q1: Think of someone who is full of integrity. What are they like?

Q2: Why is integrity honoring to God?

Q3: What are some good habits that contribute to the development of integrity?

Q4: What are some common habits among your peers that may be harmful to integrity? What are potential triggers to those habits?

Q5: Once bad habits are acknowledged, what can be done to stop the chain reaction?

Q6: When you find yourself struggling with temptation, who can you go to for help?

Application: What’s one temptation that you’d like to acknowledge right now and begin asking God and a trusted friend to help you fight this week? You don’t need to share with the group, but you should share with God and one trusted friend.