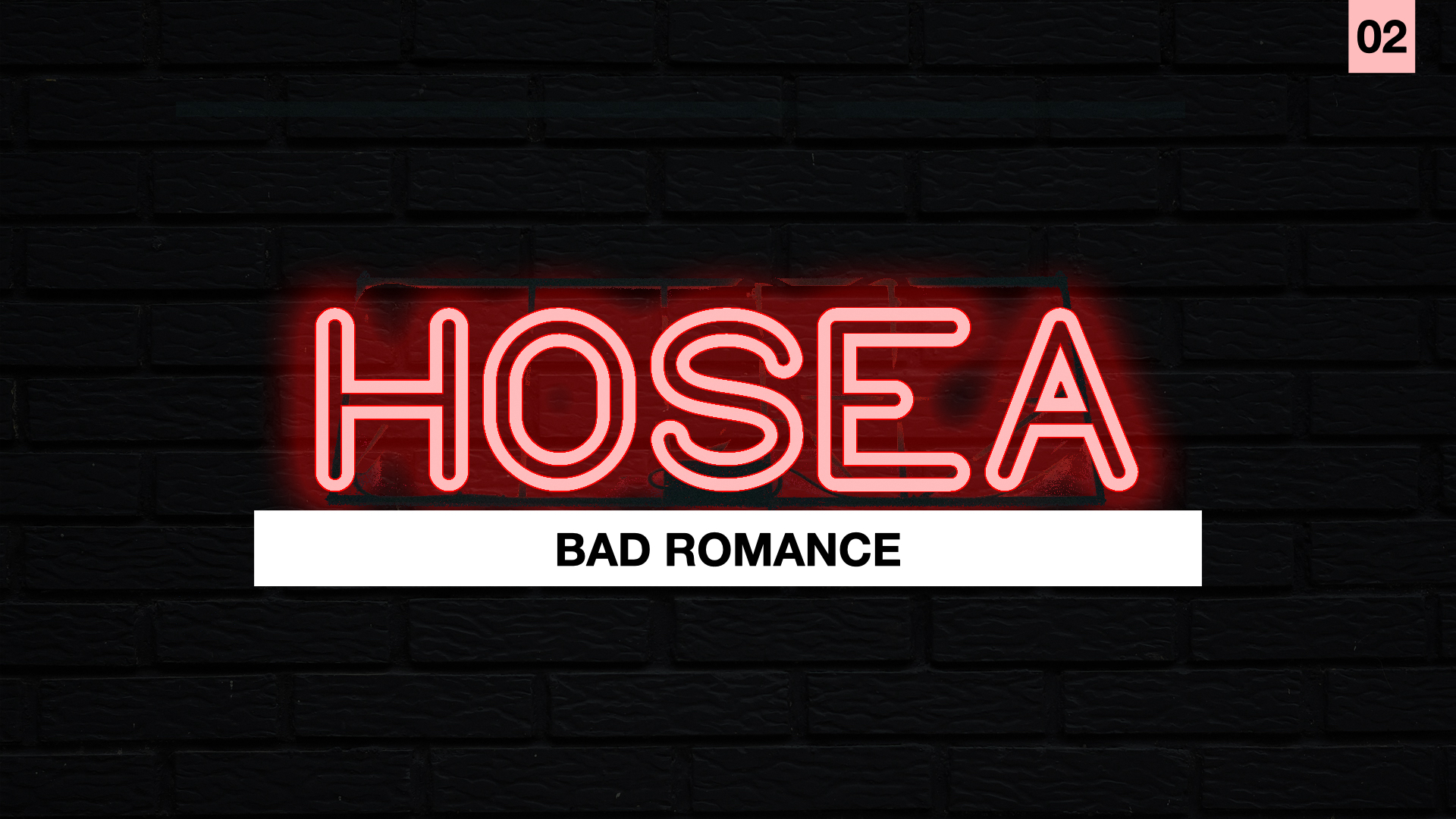 Hosea's life is a parable. He put himself through the trouble of an unfaithful marriage in order to illustrate the strained relationship between God and His people. Israel, like an unfaithful partner, broke their covenant with God. The nation had strayed from home like a cheating spouse. In chapter three, we discover that Gomer is not even living with Hosea anymore. It’s heartbreaking and hurtful for our friend Hosea. When we look at the story of Hosea, we see two key truths that sum up the entire Bible from begging to end. This bizarre tale examines our failures in the midst of God's faithfulness.

Send the attached letter to your parents in preparation for this talk.

Example: Hospitals are fascinating places. Surrounded by the same four walls, people cry over a dangerous diagnosis, celebrate the joy of a successful surgery, mourn the loss of a loved one, and welcome a new baby into the world. It’s all happening under the same roof at the same time. It’s a bipolar place full of heightened emotion and tension. Most people say that the birth of their first child changed their lives forever. Many friends have claimed that holding their newborn flips a switch in their heart. This was about to be the case for our friend Hosea. He was about to welcome his first child into the world. I imagine he was holding a bouquet of flowers while anxiously awaiting the news from the local doctor.

"It's a boy," the doctor would have smiled before handing Hosea his newborn son. His smile would turn upside down when he noticed the infant looked absolutely nothing like him.

Literally, this baby could not look more opposite than the man holding him. The reality hit Hosea like an atomic bomb. "This is not my son," he likely thought. Hosea probably put on a smiling face, but his heart was shattered. Regardless of the letdown, he still celebrated the gift of new life in his household.

Unfortunately, the sorrow in chapter one pales in comparison to the soul-crushing pain in chapter three. In chapter one, He was married, grew his little family, and dealt with the hurt of an unfaithful spouse. Life goes on. Now, let’s take a look at chapter three.

Hosea is a weird Old Testament book that tells the heartbreaking story of a prophet who married a prostitute. Each chapter reads like a scene from a soap opera filled with drama, disgust, and disappointment. Our temptation is to focus on the dysfunctional couple while missing the overarching theme of the book. Hosea's life is a parable. He put himself through the trouble of an unfaithful marriage in order to illustrate the strained relationship between God and His people. Israel, like an unfaithful partner, broke their covenant with God. The nation had strayed from home like a cheating spouse. In chapter three, we discover that Gomer is not even living with Hosea anymore. It appears as though she packed up and moved out.

Morning after morning, Hosea woke up in an empty bed to care for children that probably weren't even his. Every day was a different battle, but Hosea fought hard and pressed forward. I’m sure the sadness swept over him though. When we look at the story of Hosea, we see two key truths that sum up the entire Bible from begging to end. This book examines our failures in the midst of God's faithfulness. This story reveals the following two principles:

Sin is serious. When we read this story, our hearts go out to Hosea, right?

The sheer thought of an unfaithful relationship fills us with remorse and resentment. Why?

Because sin hurts people. Sin can create unthinkable hurt and heartbreak. This is why God puts so much effort into protecting us from the pain and suffering that comes from sin.

You've seen this play out.

The sin of dishonesty leads to the pain of broken trust.

The sin of greed leads to hundreds of people without jobs. The sin of adultery leads to the earth-shattering sting of divorce.

When we see this, we automatically become an advocate for justice.

We want the wrong to be avenged. We want the perpetrators to get what they deserve.

From greedy bosses to Gomer, we crave vengeance when we see someone’s sin hurt others.

On the flip side, we rarely want the same treatment for ourselves.

We don't want to face the consequences. We assume our sin is harmless.

Refuse to take sin lightly, because it nailed Jesus to the cross.

People strive to avoid the word “sin” at all costs.

Here's the truth: Sin is serious.

Paul teaches that the price of sin is death.

But there is good news. While the "wages of sin is death, the gift of God is eternal life through Christ Jesus.” (Romans 6:23)

This brings us to our second point for tonight.

Gomer ran away from home. We don't know exactly what happens, but this is what I imagine. Gomer found a new man who made a bunch of promises that turned out to be lies. She was swept off her feet and decided to run away with a new man. Unfortunately, the same cycles continued with Gomer, but this hypothetical new man was not as gracious as Hosea. He woke up one day and walked out. This is the problem with sin. It will take you further than you want to go, then it will abandon you. Sin will feel good at first, but it will eventually leave you feeling empty and alone. Bad decisions ultimately led Gomer to find herself in a hopeless situation. She was being sold in the ancient slave market. Hosea hears of this travesty and travels to the market to save her. Try to comprehend the scariness of this scene for Gomer. She was standing in front of hundreds of people about to be auctioned off to be a slave. Just as the bids started, she heard a familiar voice yelling from the back, "I will take her! I will give you the max possible price! Just let her come home with me." When we look at the ancient laws of Israel in Leviticus, we can see that twenty shekels is the maximum amount, but Hosea offered fifteen and a bunch of other goods to make the value twenty. What does this ultimately mean? He gave everything he had. The guy emptied out his savings account for his unfaithful wife. He didn't care what it would cost, Hosea just wanted her to be safe. He paid the highest price to protect his beloved.

America is facing a financial crisis. We are experiencing a student debt crisis. Roughly 42 million Americans are in debt due to the loans they used for school. Unfortunately, over half of them are struggling to pay back the nearly 1.3 trillion dollars owed. It’s preventing young people from getting married, purchasing homes, and even moving out of their childhood homes. We are all familiar with the concept of debt. It’s a constant weight that people carry with them wherever they go. You can’t hide from it, and you certainly shouldn’t ignore it. While you may not find yourself in financial debt (I hope not at least), you have probably been indebted to another person. You have owed someone an apology, or you have owed someone a favor. The Bible teaches that you owe a much bigger debt than an apology, chore, or even a six-figure student loan. You owe a debt to God. Imagine you were millions of dollars in debt and someone called you to say that it was all gone. Some mysterious man paid it off for you. What would you do? You would celebrate! You would cheer with joy because you are finally free. That is what Jesus did for you on the cross. Jesus paid our debt for us. Regardless of what you have done or what you owed, Jesus wiped it out. Our savior paid for every sin in your lifetime — past, present, and future.

This is the gospel. You were in slavery. You were unsafe. You were stuck. Then, in your darkest hour, the voice of Jesus shouted, "I want you back. I will do whatever it takes."

Jesus sought you out and paid the highest price possible for you.

Regardless of where you've been, Jesus wants you to come home.

If you were to examine your role in this story, you would come to a conclusion that's both unfortunate and glorious.

You are Gomer. You have turned your back on Jesus. You have been unfaithful. You are enslaved and need to be set free.

Even when you are unfaithful, God is faithful.

Even though this series is about Hosea and his unlikely bride, it also speaks to a powerful truth for you and me. Even when you are enslaved, Jesus will save you. Jesus is calling out from the crowd, "I am willing to do whatever it takes to win you back."

How amazing is that?

Let’s grapple with this life-changing reality in our small groups.

We encourage you to be open, honest, and ready to receive something special in our discussions.

Q3: How do you think Gomer felt when Hosea saved her from slavery?

Q4: How should Christians feel when God saves them from their sins?

Q5: What does it take to receive God’s forgiveness and freedom from sin?