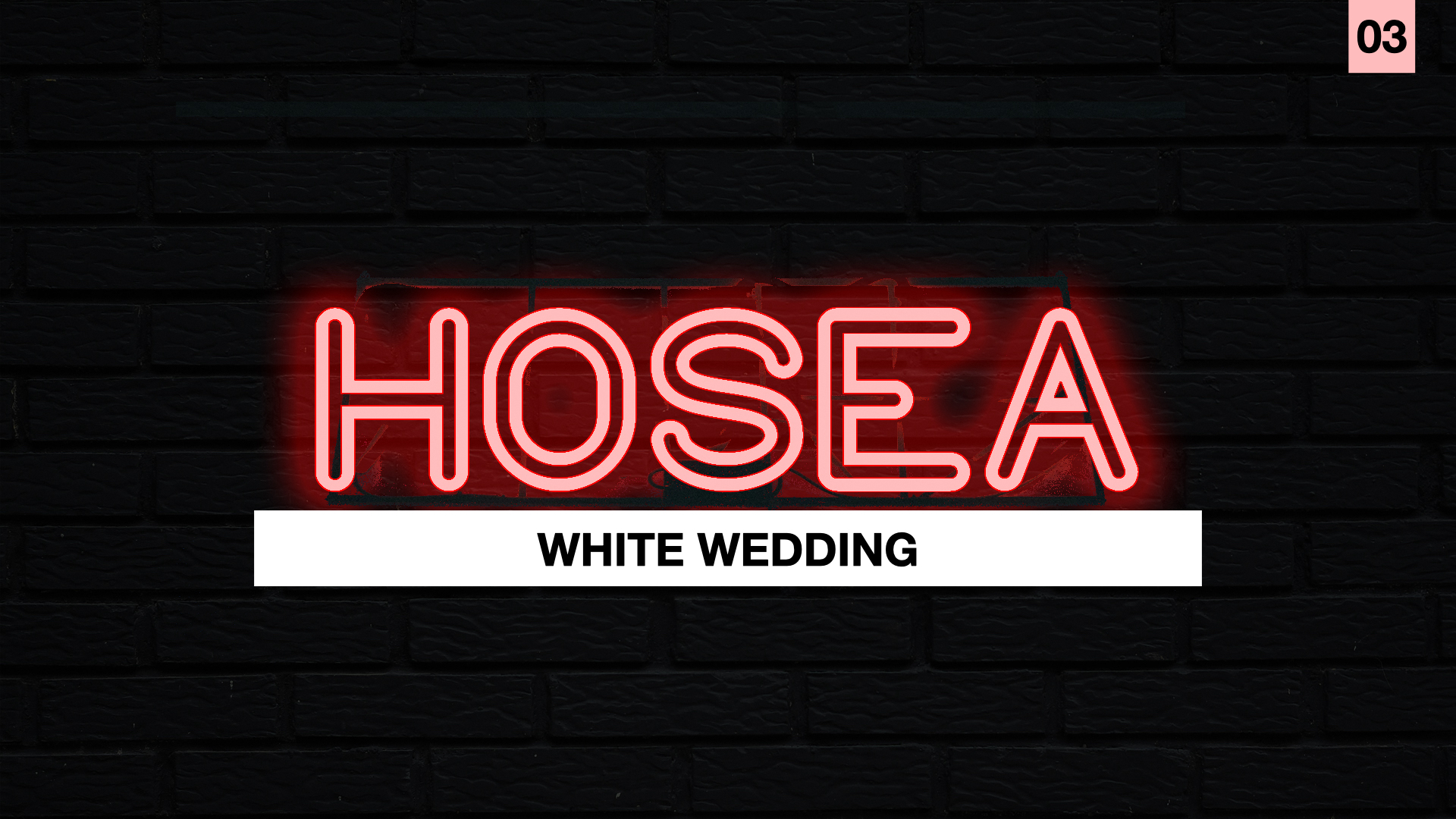 As we conclude our series on Hosea, we are actually going to jump ahead to the end of the Bible. Why? Because Hosea’s marriage story is a foreshadowing of the greatest wedding of all time. No, we are not talking about a Kardashian. We are talking about Christ. In this message, we will discuss another one-sided relationship in scripture by examining the marriage between Jesus and His Church.

Send the attached letter to your parents in preparation for this talk.

Our culture is obsessed with weddings. Do you need proof? Look no further than the classic Disney movies made for children (but mostly enjoyed by adults).

Every movie has roughly the same plot. A woman with a tough family situation goes on a quest. Whether she is defending her Kingdom from the Huns, trying to earn her legs, or just trying to find her shoe, there is always some sort of journey.

During this quest, the girl and her animal companion meet a partner who slowly captures her attention. Together they overcome obstacles, accomplish the quest, and fall in love. Most of the films end with a wedding scene featuring a beautiful dress, a powerful song, a passionate kiss, and maybe even some fireworks. The screen fades to black, and we assume that they live happily ever after.

Here is the kicker though. Why do these movies always end at the wedding? That isn’t the end of a love story. It's only the beginning. There is so much more in store for the kissing couple. These animated Disney movies likely end at the wedding because people don't want to see what happens next.

They don't want you to see Prince Charming struggling to communicate his true feelings.

They don't want to show Snow White stressing out because her husband is always disappearing.

They don't want to show the Little Mermaid and Prince Eric arguing about where to raise their family.

They don't want to depict two people crying in two different rooms because they don't know how to recover their relationship.

We love weddings, but hate acknowledging that relationships are extremely hard work.

When two people come together, their hearts and lives are intertwined. Their sins are also combined.

Their struggles are also multiplied. Marriage is like a microscope that reveals the very worst in people, because that kind of intimacy reveals your flaws. We want to experience happily ever after, but that takes hard work. Couples recite, "for better or worse," but sometimes the better comes after the worse.

This was evident in the story of Hosea and Gomer, right?

Sin tried to tear them apart, but Hosea fought to keep them together.

It was hard, but it was worth it.

Their marriage required tough talks, couple's therapy, and a truckload of forgiveness.

As we conclude our series on Hosea, we are actually going to jump ahead to the end of the Bible. Why?

Because his marriage story is a foreshadowing of the greatest wedding of all time.

Care to take a guess? It's Jesus—our savior and relentless redeemer. Let’s discuss another one-sided relationship in scripture by examining the marriage between Jesus and His Church.

The book Revelation is one of the most difficult sections in all Scripture. It’s full of imagery that is sometimes both frightening and confusing.

Apocalypse means “revelation,” which ultimately means unveiling. It’s like that game show where the prizes are hidden under a sheet — everyone is shocked when it’s unveiled.

What is the writer unveiling? Revelation is made up of a series of visions, dreams, and images that represent the events surrounding the return of Jesus.

These visions aren’t in scripture to scare us. They’re actually there to soothe us. It’s not about horror; it’s about hope.  John wrote this letter of hope while stranded on a little island known as Patmos.

This was not a tropical vacation. He was a prisoner on Patmos. He was arrested for spreading the message of Jesus. The Roman government had basically abandoned him on this island to die. It was a long and excruciating version of execution. The emotional and psychical toll of starvation, isolation, and exposure would eventually cause death.

Nero, the Roman Ruler, wanted to extinguish the hope-filled message that John was spreading.

He was fiercely fighting with the new religious group known as Christians. He was known for arresting and murdering them just because they believed in a power greater than Rome.

John was caught in the crosshairs of this conflict. Where does he find his hope when surrounded by calamity? He looks forward to a wedding party.

Get this. The Bible ends a lot like a Disney movie.

There is a wedding. Who is the bride walking down the aisle?

We are. Jesus is the groom and the Church is His bride.

As you can imagine, our relationship with God is very similar to the tumultuous relationship between Hosea and Gomer.

Regardless of what you have done, Jesus will commit to you — over and over again.

This is the culmination of the entire Bible. Jesus will return to earth by throwing a party that looks a lot like a wedding. You aren't just invited; you are part of the ceremony.

You can imagine that, right?

This is a reference to the ornate white and lace dresses worn by brides on their wedding days. Bridal gowns represent purity and innocence.

Let's be honest though. We are not pure or innocent.

We have all fallen short. We have all been unfaithful to Jesus, our groom.

Our white linen outfits have been stained and tarnished.

Here is the good news though. You didn't buy the gown for yourself—Jesus did.

His relentless love and perfect sacrifice made you clean. When prophesying the sacrifice of Jesus, Isaiah wrote, "Though your sins are like scarlet, they shall be as white as snow" (Isaiah 1:18).

On your own, you aren't worthy of this perfect wedding and this pure linen outfit.

It's not about our own purity though. It’s about something so much more powerful.

Instead, it's about the unrelenting love of Jesus that sealed your fate by taking your place. With His supernatural grace and never-ending mercy.

Jesus paid the ultimate price for you to experience happily ever after.

Imagine this with me. Picture a wedding ceremony.

The crowd stands to their feet as she slowly glides down the aisle while flowers fall at her feet.

You can see some pain in her eyes, but her groom is beaming from ear to ear. We just went back to the start. This is the opening scene of Hosea. Their honeymoon made way for heartbreak. Mistakes were made, hearts were broken, and trust was shattered. Pushing past the pain, Hosea renewed his vows again -- then again -- then again. When he said until death do us part, he really meant it.

Are you ready to renew your vows with God?

Whether you have been richer or poorer, faced struggles or setbacks, or even flat out ran away or abandoned your first love, God is ready to renew His vows with you.

Pick up your bouquet, lift up your veil,  set your eyes on your savior, and ask Him to welcome you back. I assure you that He will say "I do."

Through the power of Jesus, death won't even let you part.

Q1: What’s your favorite Disney movie and how does it end?

Q2: What are common challenges you’ve seen in families, friendships, or romantic relationships?

Q3: Do you see how any of those common hardships of relationships could be evident in the way you treat God?

Q4: What does it mean (metaphorically) when we say that Jesus is the groom and the Church is His bride?

Q5: What’s one aspect of your relationship with Jesus that you’d like to work on improving. How can you start this week?

Q6: Does anyone want to renew their relationship with Christ tonight? Let’s talk about what might be making you feel that way, then pray together.