For Ministry Resources Youth Series : Revelation: End of the World 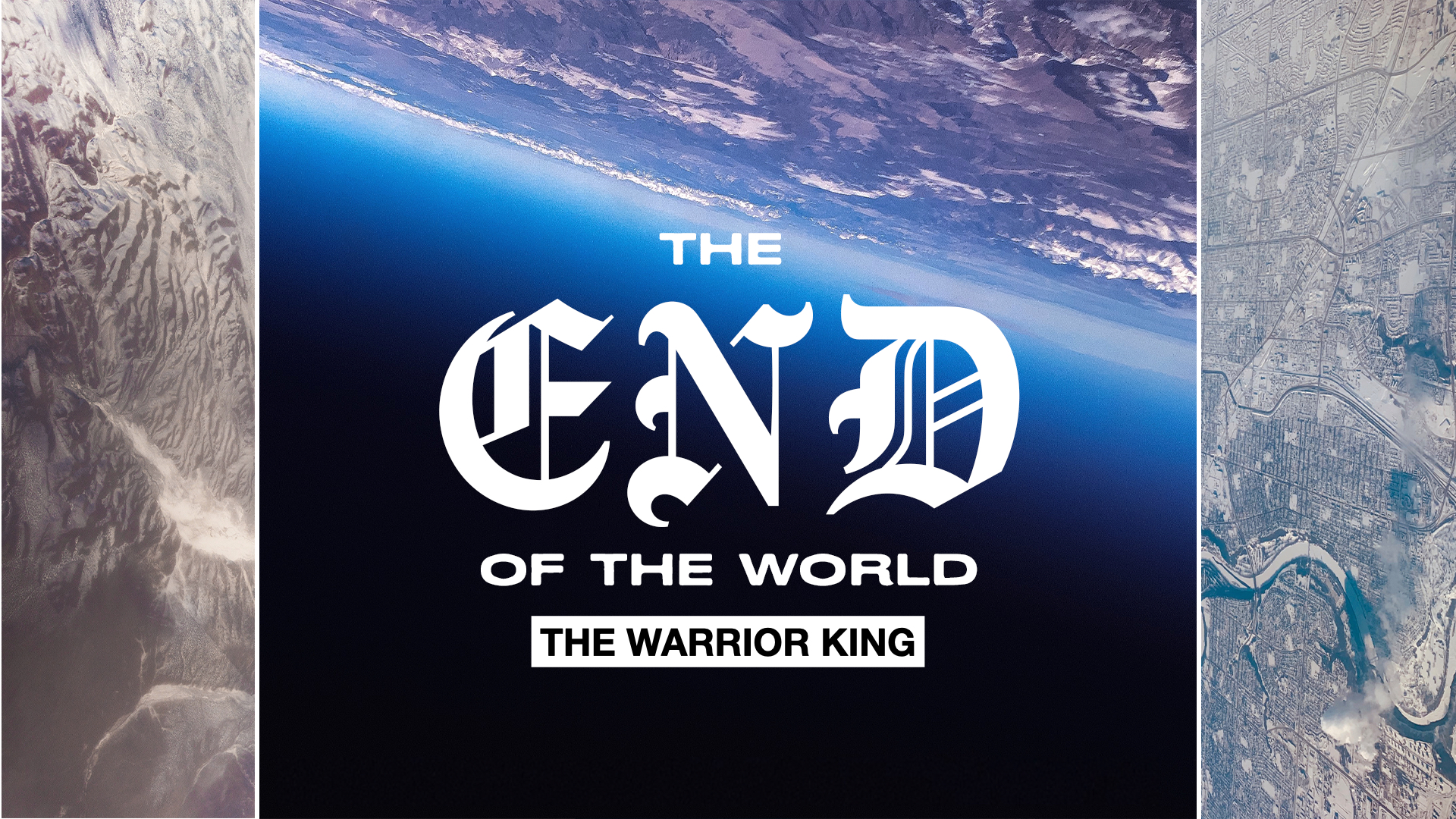 Jesus is the most multidimensional figure to ever live. Throughout the gospels, we get beautiful snapshots of Jesus bringing hope to a hurting world. In Revelation, we experience another dimension of Christ. We get to see Jesus as a vigilant warrior who rises up to destroy Satan, seal up hell, and obliterate evil The Book of Revelation assures our victory. We get to take a look at the final battlefield and know that our leader comes out on top. The darkness may fight dirty and look scary, but we will win in the end. After the battle settles and the smoke lifts, we will see the Warrior King Jesus standing over the rubble — triumphant.

What images come to mind when you think of Jesus?

We often think of Christ in a pretty passive light.

We imagine him cuddling a baby sheep, peacefully washing feet, and encouraging children to gather around while he teaches about faith.

All of these are spot on, but here is the amazing thing. Jesus, as a person, is deeply layered.

He is both peace-loving and justice-seeking.

He is able to forgive and able to fight.

He's your personal friend and the Devil's ultimate foe.

He made demons tremble and darkness flee.

Jesus is the most multidimensional figure ever to live.

We get beautiful snapshots of Jesus bringing hope to a hurting world throughout the gospels.

In Revelation, we experience another dimension of Christ. We get to see Jesus as a vigilant warrior who rises up to destroy Satan and obliterate evil.

Take a look at one of the final Apocalyptic visions of John in Revelation 19.

How does this fit with the conventional perception of Christ?

Can you wrap your head around it?

Towards the end of Revelation, John looks up to heaven to see Jesus galloping through the clouds on a white stallion with eyes that blaze like fire.

He notices a tattoo on his thigh that reads, "King of Kings and Lord of Lords."

An angelic army marches behind sword-swinging Jesus with weapons, armor, and clear orders to defeat darkness at all costs. His stark white robe is covered in blood, and he wields a razor-sharp sword with Satan's name on it.

This vision may make you a little uncomfortable, but context is important here.

Jesus had to come as a warrior because the world was at war.

Not just any war, either. Planet earth will find itself in the biggest war of all time.

Jesus will charge down from heaven to put a stop to the violence and seal the fate of the Evil One.

The Apostle John uncovers some very unsettling visions throughout most of Revelation.

We don't know exactly what they mean (neither did he).

Regardless, we should broadly examine what has happened between Revelation 5 and Revelation 19.

There is a lot of conflict in those complex chapters. This context will inform our vision of Christ as the Warrior King.

Most of these stories follow a central figure — the Antichrist.

This figure, pure evil embodied, will stand against everything that God stands for. Take a look at the chaos the Antichrist causes: The Antichrist comes to power and institutes the mark of the beast (Rev 13:1, 14-16).

God appoints two witnesses to perform miracles and preach. The witnesses are murdered by the Antichrist (Rev 11:3-13).

Plagues ravage earth (Rev 16:1-21). A plague of sores sweeps over the world, water turns into blood, and everything dies. Then earth experiences a severe drought, earthquakes shake and demolish cities, and hailstorms with 100-pound stones fall to the ground. The Antichrist assassinates world leaders and moves toward a one-world government (Rev 17:12-13).

Revelation chapter nineteen introduces us to Jesus the Warrior King. In this powerful passage, Jesus appears as the perfect King appointed to make things right.

There are three characteristics that distinguish Jesus from any other ruler.

John made an intentional choice when highlighting Jesus's outfit.

Unlike other kings dressed in royal garments, Jesus wore a white robe.

This represents his perfection.

Jesus reigns as the perfect King, which is extraordinary news for us.

Since Jesus is perfect, that means that He is wholly trustworthy, just, and will always fight for the good of His people.

Do your life circumstances feel like an enemy army is closing in on you? Jesus will defeat them.

Do you feel like injustice is all around you? Jesus will make things right.

Have difficult experiences wronged you, hurt you, or harmed you? Jesus is the perfect King who will rule with righteousness. Justice is coming — from the greatest King in history.

Jesus is supreme over every nation, every ruler, every general, every prime minister, and every governor.

No power comes even close to King Jesus.

Think of the most powerful person on earth.

They may have wealth, influence, and lots of Instagram followers.

Jesus is supreme over them.

In the scheme of God's Kingdom, they are just names on the pages of history.

Even the mightiest people are pawns in the chess game of God's story.

We are blessed to serve the supreme King.

No person, position, or regime can even come close.

And, here’s the great news, when you serve Jesus, you’re serving the only undefeated King.

At the end of Revelation 19, John prophesied a certain victory.

Jesus, upon his white horse, waged battle against the Beast and his army.

John explained, "the beast was captured and with it the false prophet who had performed the signs on its behalf. With these signs, he had deluded those who had received the mark of the beast and worshiped its image. The two of them were thrown alive into the fiery lake of burning sulfur" (19:20).

What does this mean?

I'll sum it up. Jesus wins in the end.

Pastor Max Lucado shared a parable to illustrate this section of scripture.

He wrote about a wise general whose army was terrified of their impending battle.

They were scared, and they were shaking in their boots.

With kindness in his eyes, their general assured them that he had a secret weapon. It wasn't a plane or a grenade.

It was a coin.

He told his men of a prophetic coin that would predict their victory.

Before every battle, he'd flip the coin and the soldiers would stare as it flew up into the air and down into his hand.

He'd reveal the coin to show that it was heads.

The army was going to win.

His troops marched into battle with their heads held high, knowing that victory was certain.

After a string of victories, one of the soldiers asked to investigate the magic coin.

His eyes grew wide when he saw something stunning.

It was double-sided, showing heads on each surface.

The outcome of the coin flip was assured, but so was their victory.

In Revelation, we see that Jesus has a double-sided coin too. Our victory is certain.

There is no possible outcome where we don't come out on top.

That is the gift of Revelation. This amazing book assures our victory.

We get to take a look at the final battlefield and know that our leader comes out on top.

The darkness may fight dirty and look scary, but we will win in the end.

After the battle settles and the smoke lifts, we will see the Warrior King Jesus standing over the rubble — triumphant.

Satan will fall. Jesus will stand victoriously. We are assured of our victory, so march forward.

It's a lot easier to face life's battles when we know that our victory is already sealed.

There is no fight, struggle, or adversary strong enough to change our guaranteed outcome.

Whatever foes you are facing, I can assure you that you're going to win in the end. Why?

With Jesus, victory is your identity.

Because Jesus is our Warrior King.

Follow closely behind Jesus because He's undefeated, undefeatable, and He will refuse to lose.

Q1: What’s one thing that stood out to you from today’s message?

Q2: What pictures come to mind when you think of Jesus? How does Revelation 19 fit in with your initial thoughts?

Q3: Jesus is both peace-seeking and justice-serving. Why should that encourage us?

Q4: We live in a world where rulers and leaders fail often. Why is it an important distinction that Jesus is perfect and pure?

Q5: Our victory in Jesus is secured and ensured. What should that mean for us as we face battles in life?

Application: How can you draw closer to Jesus when your life feels like a battle?